On a beautiful spring day in Paris, Grigor Dimitrov, seeded eleventh in this year’s French Open, beat a long time nemesis, the 35-year-old Tommy Robredo of Spain, in round two on the famous “bull ring” stadium at Roland Garros 6-3,6-4,7-5.

Robredo held a 3-1 head to head advantage, and upset Grigor on clay just a few weeks ago in Marrakesh, Morocco.

The Bulgarian appeared highly focused and ready for a bit of revenge in this their only meeting at a grand slam tournament.

Dimitrov broke Robredo’s serve in the fourth game and held serve convincingly to take set one 6-3.

And in set two, Grigor fought off a break point and four deuce points to hold serve in game four. He then quickly broke Robredo’s serve in game five, and when he served for the set in game ten, dominated with an ace and then a forehand winner to take set two 6-4.

Robredo stiffened in set three with both players holding serve until 5-5.Dimitrov then broke serve with a backhand winner and closed out the match with a dominating service game.

Dimitrov is back in the “bull ring” court with his next opponent, another Spaniard, the 25 year old Pablo Carreño Bustos, who’s seeded twentieth. Dimitrov holds a 2-1 lead in their head to head meetings, but Bustos won their last meeting in Madrid in 2016.

If Dimitrov wins, it will be the first time he’s reached the fourth round at Roland Garros. 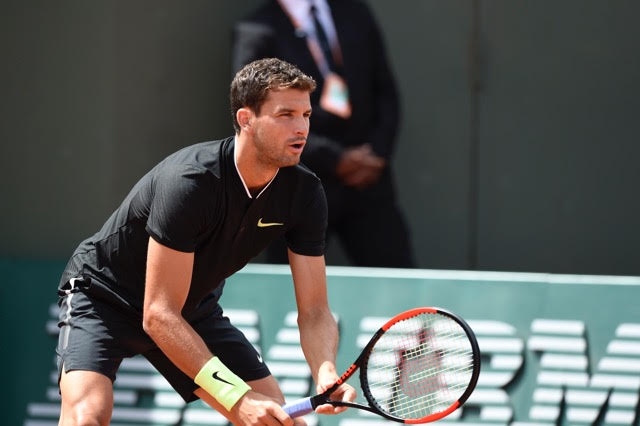