Sheriff Dart reminds the public that while the Firearm Concealed Carry Act (PA 98-0062) became state law on July 9, 2013, it remains illegal to carry a concealed handgun without a license issued by the Illinois State Police. Under the Act, the Illinois State Police has 180 days to make the license application available, followed by a 30-day period for local enforcement to file an objection, if warranted. Therefore, the earliest date an individual could be issued a conceal carry license and be authorized to carry a concealed handgun under the Act is likely February 10, 2014.

Possession of a valid Firearm Owners Identification Card does not authorize the carrying of a concealed handgun under the Act. Carrying a concealed loaded handgun without a license constitutes aggravated unlawful use of a weapon, a Class 4 felony, punishable by 1-3 years in the Illinois Department of Corrections. The Cook County Sheriff’s Office will enforce current law. Until the State of Illinois begins issuing conceal carry licenses, anyone in Cook County found unlawfully carrying a handgun will be subject to arrest and prosecution. 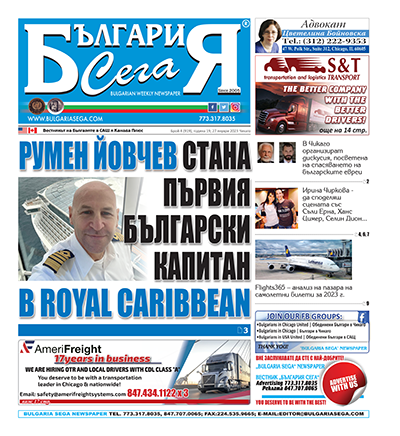 ABOUT US
"Bulgaria Sega" newspaper (Est. 2005) is the most reputable and credible Bulgarian media in the USA & Canada!
FOLLOW US
© 2005-2023 "Bulgaria Sega" Newspaper | All Rights Reserved